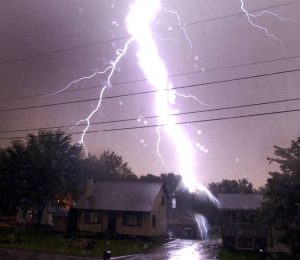 Spring is here, and that means thunderstorms.  Thunderstorms mean lightning, and lightning means power surges.  Pretty much everyone I know, including my grandparents, have electronics worth protecting.  Most everyone knows to plug their computer or their televisions into some type of surge protector, but how do you know that your stuff is actually being protected?  Are you practicing good “surge protection behavior”?

When I worked at Geek Squad, any time there was a large electrical storm, we would sell out of replacement power supplies for computers and dead televisions coming in for repair were on the rise.  Many times, the people who had a loss due to a surge told me that their device was plugged into a surge protector.  Whether they were telling the truth or not is irrelevant because there are many reasons why having your television or computer plugged into a surge protector isn’t enough.

Here are 4 things you can do to assure you have the highest level of protection for your sensitive electrical devices, and your entire home.

A surge protector will always have some type of light (it can be red, orange, green, or any color) that indicates “protection” or “surge”.  Sometimes the power button itself will actually glow to indicate its a surge protector.  If your device doesn’t have any lights or anything written on it that says the words “surge” or “protection”, you aren’t protected.  Power strips are fine for Christmas lights or adding extra outlets to areas that need it, but shouldn’t be used for computers and other A/V equipment.

Higher end surge protectors claim to offer higher levels of protection, but whether or not they actually do is extremely difficult to prove.  Most of the specs thrown at you on the packaging like Joule rating or Max wattage protection are just advertising tactics.  The maximum wattage of a surge protector is determined by the fuse or breaker in your house on that circuit (a 15A circuit breaker in a residential home can handle 1800w, a 20A breaker can handle 2400w).

Many surge protectors have coax protection or modem protection.  Since very few people use modems any more, the phone line plugs are pretty worthless.  Surges can travel through coax from your cable or satellite provider, so its not a bad idea to use those features if they’re available.

3. Replace your surge protection after a severe lightning storm, or every 5 years, which ever comes first.  Remember that a surge protector is designed to “take one for the team”.  This means that it will sacrifice itself for the good of the things plugged into it.  Inside of a surge protector are little round electrical components called capacitors.  Capacitors absorb and release electrons.  Think of them like springs on a trampoline, they stretch, and then retract, they stretch and retract.  Stretch them too far and they will break.

If you know your house was hit by lightning and your devices weren’t fried, then there is a good chance those capacitors inside of your surge protector were damaged and need to be replaced.  If you see that any of the lights on the surge protector are off or flickering, then that means it is not protecting your device.

Even if you haven’t been hit by a bolt of lightning, and even if the lights are staying on steady, you should still replace the surge protector every 5 years.  If you don’t know how old a surge protector is, then there’s a good chance its more than 5 years and needs to be replaced.

On a nice sunny day, your house’s wiring is bombarded with thousands of minor surges.  The quality of the electrical power entering your house varies by location.  If you are in an old house or an older neighborhood with older wiring, your electricity may be of low quality.  Furthermore, every time a high current device is turned on in your home such as the air conditioner, a hairdryer, electric heater, microwave oven, or the compressor in your refrigerator, a small surge travels through your house.  If you ever see your lights momentarily dim when something turns on, that is a surge.  Your surge protector is protecting your devices from these things constantly and over time, its ability to absorb these electrical surges is diminished.

If you are replacing an older surge protector, you don’t necessarily have to throw it away.  Take the old one that was protecting your home theater, and use it for small kitchen appliances like a can opener or coffee maker, or throw it up in the attic for future Christmas light decoration expansion.  Old surge protectors still make good power strips.

Installation is actually pretty easy and is something the average person can do themselves.  If you can operate a screwdriver, know how to use wire strippers, and have common sense, this is something you can do yourself. There are literally 4 wires you have to connect inside of your electrical panel.

Despite the simplicity, installation does involve opening up the electrical panel in your house which is VERY DANGEROUS so if you have any doubts, you probably should hire an electrician to do it for you.

These work by being connected to 2 existing breakers in your electrical panel and absorbing any surges that go through the entire panel.  It is recommended that you connect it to 2 unused breakers, but they can be tapped into 2 existing ones, as long as each breaker is on a different phase.  There are tutorials online that show you how to do this, so if you’re willing to try it yourself there is a lot of good info out there.

Since most people aren’t willing to work on their service panel themselves, its best to call a certified electrician to have this upgrade done to your house which will add to the total cost of owning a whole home surge protector, but if you consider the replacement cost of things in your house, this small investment could possibly pay off later on down the road.

The one down side to installing a whole home surge protector is that like any other surge protector, once they take a big surge, they need to be replaced, and if you had to hire someone to install it in the first place, you’ll need to call them again to replace it.

So there ya have it, 4 great recommendations that you can do assure that your electrical stuff is protected as much as possible.  I know that most people wont go through the effort and expense of installing a whole home surge protector, but that’s not going to stop me from recommending them.

Even if you don’t go with number 4, I strongly urge you to go through numbers 1 – 3 and make sure everything is protected.