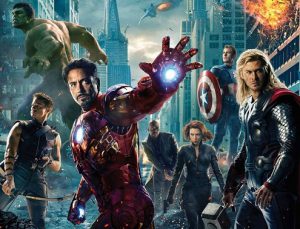 I just got back from seeing the Avengers for the second time.  For those of you living under a rock the last week and a half, the Avengers has broken literally every single box-office record thus far into its release cycle.  It made over $207 million in its first weekend, which is nearly $40 million more than the previous record holder. The movie hit the $1 billion worldwide mark in only 19 days, which is super-fast.

So, it would seem that a movie this popular must really be good.  But is it?
I will say that the Avengers is very good, very VERY good.  After I walked out of the theater the first time, I was extremely pleased with the movie.  I’ll admit, I wasn’t much into comic books as a kid, so, I haven’t been familiar with any of the 4 main characters of this movie.  Sadly, I can only credit seeing the first Iron Man movie prior to seeing the Avengers.

I am happy to say that this movie does not require you to have seen any of the previous movies or even be familiar with the comic books.  I am sure there are subtle jokes and plot references that went over my head, but it did not detract from my ability to enjoy the movie.  All of the characters are like able, even the bad guy, Loki is played brilliantly by Tom Hiddleston.

One factor that I think really helped this movie be as good as it is, was the selection of Joss Whedon as it’s director.  Joss has a lot of experience in the comic book/fantasy genre with credits such as Buffy the Vampire Slayer and Serenity/Firefly.  I think it really takes a true fan to make something really special and it definitely shows here.

Joss wisely walks the line of comic book humor and real world action.  This movie has both elements in great quantities.  The CGI in this movie is top notch and rarely looks fake even though the actors are clearly moving in ways that are humanly impossible.  The movie clocks in at a solid 2 hours and 24 minutes, but doesn’t feel that long.  After the first watch, I walked out of the theater not realizing that it was some 2.5 hours later.

Without revealing too much about the plot (for the 2 of you who haven’t seen the movie yet), I’ll say that the ending fight sequences are top notch.  Some of the best I’ve ever seen in a movie of any kind.  As a matter of fact, I will go on record saying that the action sequences in The Avengers outclasses anything Michael Bay has ever done.  Where Michael Bay likes over the top damage and destruction, he leaves out the excitement.  Joss Whedon wisely turns the action only up to 11, whereas Michael Bay stacks ten amps on top of one another, connects them in series, and turns them up to 110, meanwhile losing the viewer in non-stop explosions and taking any hope of a cohesive story out of the mix.

So after the first viewing, I am thinking to myself, yeah, this movie isn’t all hype, it really lived up to my expectations.  After the second viewing, the movie is still good, very good, but the second time around, I noticed the 2 hours and 24 minutes a little more.  The beginning seemed to take a little longer to get going.  Some of the scenes seemed to have no point (like the initial interrogation scene with Black Widow and the Russians – yes, we know she’s a badass, we don’t need a 10 minute scene to show us this).

The jokes were still funny.  I still laughed out loud at the Hulk’s treatment of Loki near the end of the movie, and I still enjoyed most of Robert Downey Jr‘s dialogue.  The movie is still awesome and I can’t wait to get the Blu-Ray and view it in my home theater.

Buuuut, I’m going on record and saying The Avengers is not the best movie I’ve ever seen.  Its not even the best comic book movie I’ve ever seen (The Dark Knight is), but it is very, very good, and is well on track to be the best movie of 2012.  I’m just not that excited about the Spider-Man reboot, and the third Dark Knight movie just isn’t exciting me in the way that the last two did, mainly because I am REALLY having a hard time swallowing the whole Anne Hathaway/Catwoman character.

So, there ya have it.  My take on the Avengers.  This movie is awesome, and I strongly recommend everyone see it, even if you are not a fan of comic book movies or action flicks.  This is a good quality movie, and it is worthy of seeing on the big screen.  Just make sure you keep your expectations in check.  Food will still taste the same when you go home, you will still have the same job and the same bills as you had before.  Nothing in your life is going to change afterwards.