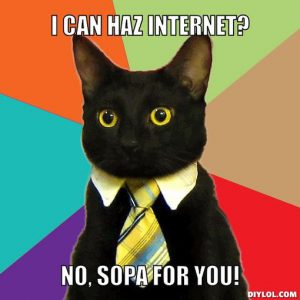 A revolution has occurred.  Whether you were aware of it or not, on Wednesday, January 18th, there was a 24 hour blackout of a number of big internet sites.  Most significantly was Wikipedia who shut down their site for 24 hours to prove what the Internet could be like if the flow of information was interupted.  Other companies such as Google who left their websites functional, responded by blacking out their logos.  I posted my thoughts on SOPA/PIPA a couple of days ago, you can read it HERE.

For those of you who did go to Wikipedia’s site, you would get THIS page that explained why they were down that day along with links to your local congressional representatives so that you could contact them to let them know that you are not happy with these laws.  Google created an online petition which recorded the names and email addresses of anyone who wanted to let their voice be heard in opposition.

Almost immediately, multiple congressional representative’s websites reported massive overloads which caused many websites to fail.  Within 24 hours, several members of Congress, including Marco Rubio who helped co-author the bill, announced their reversal of support for the bills.

The next day, Google reported that their petition collected over 4.5 million signatures.  Both Twitter and Facebook announced that “SOPA” was the most used term tweeted and posted by its members.  Even more congressional representatives, including 11 other co-sponsors announced their shift in support away from SOPA/PIPA.

Finally, early morning on Friday, January 20th, both Senate and House leaders announced that all plans to move forward with the existing SOPA and PIPA bills would be stopped thus effectively killing both bills.  Senate Majority Leader Harry Reid encouraged the bill’s main sponsor, Senator Patrick Leahy, to work out compromise in the bill “to forge a balance between protecting Americans’ intellectual property, and maintaining openness and innovation on the Internet”.

So, there you have it.  A modern day revolution has been successfully completed in less than 2 days.  For those of you who did your part in voicing your opinion on the matter, your voices were heard!!