This is a Kodak Signet 80 rangefinder camera made by the Eastman Kodak company out of Rochester, NY in 1958.  It was the most advanced, and also the last of the Signet line of cameras.  It was the only Signet model to have an interchangeable lens mount and represented one last attempt by Kodak to make a mainstream “system” camera.  A combination of high prices and low specs doomed the camera from the beginning and it did not sell well.  The Signet 80 was one of Kodak’s last attempts at building anything resembling an advanced camera as all new models released after this camera were cheap point and shoot Instamatic models.  Despite it’s lackluster history, this is a solidly built camera with a couple of compelling features, and like most of the Signet line, came equipped with very capable lenses. 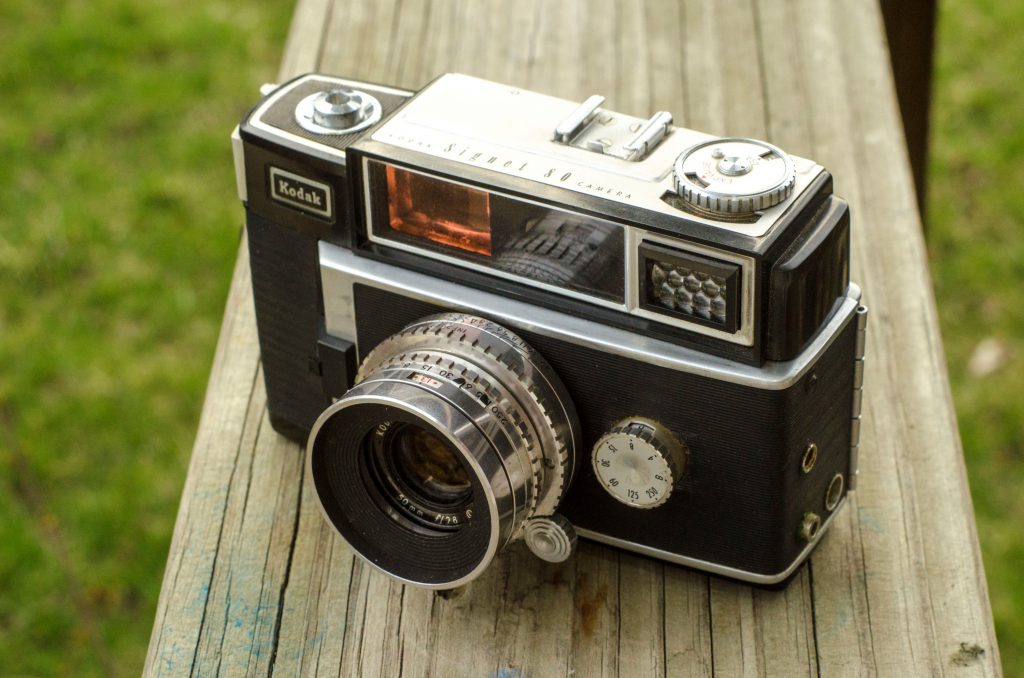 There was once a time when I fell victim to the popular theory that the only good Kodak cameras were ones with the name “Retina” on them.  Then I discovered the Kodak Medalist.  A honking beast of a solid piece of metal with one of the most amazing 5 element Ektar lenses on it.  Next came a little afterthought of a camera that I paid $5 for, called the Kodak 35 with the Anastigmat Special lens.  This little 1930s Bakelite gem has turned out to be one of my favorite vintage cameras of the 80+ in my collection.  After that came the mostly aluminum Kodak Signet 35.  It was the first in a whole series of Signet cameras, and was an extremely handsome camera in a mostly aluminum body with an awesome 4 element Ektar lens.

I was getting cocky.  Upon learning of a more advanced Signet model that had interchangeable lenses, and a similarly good Ektanar lens, I knew I had to have one.  Ironically, the one pictured here is the second one I tried to buy.  The first was one I won on eBay and paid for, but the seller never shipped it.  A claim to eBay and 30 days later, I got my money back, no worse for the wear, so I set my sights on another.  My fortunes turned good as I found a very clean looking example in it’s original box, with a nice field case, and the Signet wide angle auxiliary lens.  Score!  Two lenses for the price of one!

My excitement turned to dismay as I received the camera as it was in pretty terrible shape.  For one, the auxiliary lens was completely seized and I could see one of the iris blades was dislodged.  The 50mm lens was OK, but very stiff.  The viewfinder was large and bright, but the rangefinder had severe vertical alignment problems.  Usually a small amount of vertical error won’t negatively affect your focus, but this was way off.  Finally, the deal breaker was that I could cock the shutter, but nada.  It was seized.

Thinking I had another job for my trusty bottle of Ronsonol lighter fluid, I soaked this thing, repeatedly, but no amount of lubrication would get the shutter to budge.  I came to the conclusion that something was physically damaged inside of the camera.  The first time I removed the lens, I could see a metal plate that encircles the shutter was loosely flopping around inside of the body.  I thought perhaps I could open the body, but the solid Bakelite plastic did not reveal how to get itself open.  I searched online for CLA instructions on this camera and found none.

The Signet 80 did not sell well.  While it should have been a pretty desirable model for Kodak, the very limited selection of shutter speeds, coupled with it’s ‘love it or hate it’ styling, and it’s $130 price tag in 1958 (when adjusted for inflation, that’s $1082 today) meant that very few were sold.  I found stories that around the time of it’s discontinuation, camera shops had these things on clearance on the shelf trying to sell them at bargain prices and still had a hard time moving them.

So, with so few sold, and it’s rather poor reputation, it’s no surprise that finding repair information on them today is difficult.  I quickly realized that I was over my head, and knowing that I had at least a cosmetically good looking specimen with it’s original box, field case, and an extra lens, I listed it on eBay and broke even.

Would I take a chance on another Signet 80?  I honestly don’t know.  I can say that if you like quirky cameras, this one has quite a few for you.  For starters, the shutter speed selector is on a dial on the front of the camera, kind of like an Argus C3.  I can forgive this odd location on the Argus considering that camera was designed in 1938.  This one came out 2 decades later and Kodak should have known better.  Second, the frame counter was strangely on the bottom plate of the camera, just beneath the lens.  It’s a very strange location and one that’s not even obvious the first time you look at it.  I would not be surprised if at least a few people used this camera without ever realizing there is a frame counter on it.

Finally, the strangest design element of the camera is something Kodak actually advertised as a good thing.  The film compartment had no take up spool.  Instead it had a hollow chamber that allowed the exposed film to coil around itself in as you advanced the film.  Kodak referred to this as “injection” loading.  The idea was that by not needing a take up spool, the loading process was greatly simplified.  You would simply install a new cassette on the supply side, and then feed the film leader into a slit that opened into the hollow chamber, and then close the door.  As you advanced the film, two gears would pull the film out of the cassette and feed it into that slit upon where the film would just form a coil around itself.

It probably worked better than it sounds, but still, I can’t think of any other camera or manufacturer who tried this feature, so clearly it was not received well by the public.

Sadly, the Signet 80 could have been a much better camera.  The viewfinder was large and bright.  The Bakelite body, while lightweight, was sturdy and rugged, and the lenses available for the Signet were quite good.  Take a look at this post on photo.net by Louis Meluso who writes about his Signet 80 and shows some excellent sample shots taken with his.

I will never understand Kodak’s insistence in the mid 20th century to make cameras with excellent optics, and pair them with low-spec shutters and oddball designs.