“This Post will contain spoilers, so do not read unless you either don’t care, or have already seen the movie” 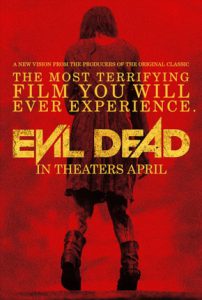 After many months of anticipation, I finally had a chance to see Fede Alvarez‘s remake/reboot of Sam Raimi’s 1981 classic film, The Evil Dead. I have been a fan of the entire Evil Dead series since I first saw them as a teenager. When it was released, the original Evil Dead film pushed the limits of modern horror and the story and special effects in that movie still hold up well to this very day. The movie was filmed in 1979 on a shoestring budget, yet it basically created the “Cabin in the Woods” sub-genre of horror, and introduced the world to the B-Movie greatness of Bruce Campbell.

Hollywood remakes are standard fare these days, and most of the time, these remakes fall way short of the original. One notable exception was the 2004 remake of George Romero’s Dawn of the Dead. I enjoyed the remake for a lot of reasons. For one, it kept the same basic premise of the original (zombie apocalypse survivors in a mall), but made it its own story, without completely ignoring what was good about the original. While the Dawn of the Dead remake was it’s own movie with its own characters and story, there were a lot of homages to the original through subtle cameos, or scenes that only fans of the original would pick up.

This new 2013 take on Evil Dead in some ways sticks closer to the original while still changing a few things to establish itself as a separate film.  Starting with whats different, the movie begins with a back story of what the Book of the Dead is used for. We see a sacrifice of what appears to be an innocent girl by her father and several inbred looking witchcraft people. Moments before she is set fire, the demon possessing her reveals itself, and you see the demon burning at the stake with a witch-like lady reading directly from the book. In the original, the only back story for the book is whats revealed on the tape recorder found in the basement. This change to the new movie works well. I had no problem with the back story, and proves that while the book is evil, that evil could be defeated with correct interpretation of the words found within the book.

Two more changes to the new film surround the characters and their back story. The first being that none of the characters bring back Bruce Campbell’s character of Ash. The lead male actor is named David (played by Shiloh Fernandez) and while you could say hes the primary protagonist, he has none of the charisma or interest of Ash from the original movies. This change is the single biggest flaw of the movie, the character of David is bland and seems out of place from the other characters who seem to fit their roles better.

In addition to the characters being entirely new, their back story is different as well. Whereas in the original we have the “a generic group of kids drive to a desolate cabin in the woods for some mischief and fun, evil ensues” plot, the new movie adds a back story in which a heroin addict named Mia, travels to an old family cabin with some friends and her estranged brother for a weekend of rehab. The plan is to isolate Mia from her problems and have her quit drugs cold turkey with the support of those who are close to her.

While this back story mostly works, and sufficiently explains her early demonic behavior to her friends, the back stories of the other characters are kinda random and don’t go anywhere. The biggest offender is how David (the brother) separated himself from his sister and their dying crazy mother. There is a war of words between David and one of the other characters, Eric. The movie tries to create tension between David and Eric that really isn’t necessary and doesn’t go anywhere. David brings along his girlfriend Natalie who has no back story at all, and offers absolutely nothing to the story (other than adding +1 to the body count).

There were early rumors that this film would be rated NC-17 and many scenes were cut, so perhaps there will be a Director’s Cut eventually that further explains this story, but I really doubt it. I expect any Unrated cut to add more gore and guts, not a more elaborate back story. As I said earlier, I don’t mind having a new back story, but I just feel like it was half-assed. I think the story should have either been more developed and had some type of payoff, or eliminated altogether. After all, most horror films don’t really need a back story at all. The simple fact that there are characters and that they die in some gruesome way is usually enough.

This really is my only complaint with the movie. I feel as though some effort was put in place to differentiate this movie from the original with a more developed story line, but it really falls flat and adds nothing to the story.

The good news is that the movie does many other things well. As I’ve already said, the new Evil Dead makes an effort to differentiate itself from the original, but there are a LOT of clues to the original that work well in the new movie. First of all, the cabin itself was an almost identical replica of the original. I haven’t yet done a side by side comparison, but from my memories of watching the original Evil Dead, the façade of the cabin looks the same to me, from the dilapidated wood panels, to the shape of the roof, even the wooden swing on the porch are all there. The inside of the cabin faithfully recreates the look of the original. Even the hatch leading to the basement is well done and clearly resembles the original.

The new movie keeps the same balance of horror and humor as the original, in that its mostly horror with minimal humor (unlike the sequels which were mostly humor). The only real humor in this movie is in some of the exaggerations, just like in the original. There is no silliness like in Evil Dead 2 and Army of Darkness. There is a montage where David is putting together a device that has some of the same quick cuts as Ash’s scene where he is creating his chainsaw weapon in Evil Dead 2. There is a scene involving an arm being cut off (but it wisely stays away from the animated hand attack scene of the second movie). There is even a hint at a chainsaw scene, that I’ll leave up to the imagination.

There are many other more subtle salutes to the original movie like the same yellow Oldsmobile Delta 88 making an appearance early in the movie. The “evil flying camera” effect from all 3 original movies is retained for this movie. David gives a round necklace to his sister that is similar in design to the one Ash gave Linda in the first movie.  There are even various sound bytes directly from the original movies that are mixed into the soundtrack mix of the new movie such as the “One by one we will take you” speech from the original Evil Dead, and even a portion of the the narrated audio tape from the basement makes an appearance during the closing credits of the movie.  There are several others, and I’ll leave it up to you to find them.  If you want a spoiler, THIS SITE has a rundown of 23 of them.  For what its worth, I recommend staying to the very end of the closing credits for a small surprise

Perhaps the thing that will get the most recognition is the amount of gore in this movie, and well, there is a lot of it.  I have to say though, that I think the limits of what can be shown in a movie to gross people out really has reached its limit.  I did everything I possibly could to distance myself from this movie before it was released, so I could go in with as few expectations as possible.  I will admit, there were a couple of “seat squirm” moments for me, but I can honestly say the movie wasn’t as over the top gory and violent as it could be.  In some ways, that’s a good thing.  There gets to be a point where overdoing it just cheapens the movie.

The Evil Dead isn’t about simply grossing you out and it seems that Fede Alvarez understood that.  After all, this is still a movie with a story to tell, and its a good one.  As I mentioned earlier, most horror movies don’t need much in the way of a back story.  Heck, most horror movies don’t have much in the way of a plot, but for what it is, Evil Dead mostly succeeds in this regard.  Despite my complaints about the flaws with the David character and forced tension between him and Eric aside, this is a really good movie and I look forward to seeing it again.

Nothing will ever take away or change my love for the original, but this movie is definitely a great compliment and it definitely stands on its own as a staple in the horror genre.  If anything, the thing that I hope this movie proves is that you can remake a horror classic and do it right.  If only someone could go back and redo both of the Friday the 13th and Nightmare on Elm Street remakes, we’d be all set!