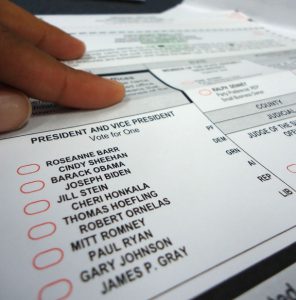 Today is Election Day.  A day that is no different than any other for almost half of America.  These people will wake up, go to work, come home, have dinner, and go to bed without any inclination to go cast their vote.  Ask them why they don’t vote and they’ll probably say one of the following statements:

“I don’t like either candidate.”
“My one vote won’t make a difference.”
“Nothing will change anyway.”

Their opinion that its pointless to vote actually does more to make their objections true than to actually do something about them.

The 2008 Presidential Election was one of the most active presidential races in many years.  Barack Obama was the first black candidate to actually have a shot at the white house.  His run for president stirred the emotions of many people.  Young people came out in higher numbers to cast their vote than in the last several elections.  Despite this uptick in voter participation, only 131 million out of the 206 eligible voters 18 years and older actually voted.  This means that 75 million, or 63.6% of the people who could have voted could have.

If you look at the two candidates, Barack Obama and John McCain, Obama got 69.5 million votes, and McCain got almost exactly 60 million votes.

So, purely looking at the number of people who had a chance to make a choice, but didn’t, we can see that if all 75 million eligible voters would have actually gone to their polling place and actually voted, we could have had a different president.  Heck, all 75 million of those people could have written in Chuck Norris, and we’d have Chuck Norris as our President now.

The lack of a chance to actually vote is only one part of the problem.  In my opinion, the greater issue here is the failure of the two-party system we have in place.  The last time we had a serious third candidate was Ross Perot in 1992 when he got just under 19% of the popular vote.

The problem with a two-party system, is you have to pick one or the other candidate. What if neither of the candidates interest you?  What if there are things that you like about the Democrat, but not the Republican, or vice versa.  Lets say, you are a supporter of the Democratic party, but you just don’t happen to like the guy that is the Democratic candidate?

In 2008, Barack Obama’s campaign slogan was “Change”.  People wanted change, but did it really happen?  In my opinion, the only chance we will ever have at there being any real change will be when we can get away from the two-party system.

I vote Libertarian, not because I like the Libertarian candidate.  I honestly don’t even know much about Gary Johnson.  I know he won’t win.  I know this because not enough people think like me.  I didn’t cast my vote because I want Gary Johnson to be my president.  My vote for the Libertarian party is my way of saying “I want a third option.”  I am not going to be part of that 75 million that just sits at home and watches something recorded on my DVR.

If you want to continue to sit on the sidelines and not vote, then fine.  You probably believe what you’re gonna believe, and I wont be able to change your mind.  Just know that your refusal to vote, is actually a vote towards continuing to do things the same messed up way.  You are doing your part to contribute to the problems we have with our election system.  You are the problem, not me.