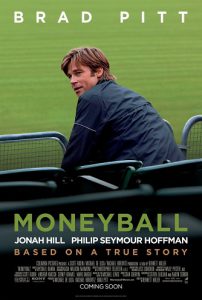 Most sports themed movies come in one of two forms.  The comedic ones (Major League, Unnecessary Roughness, Happy Gilmore) or the inspiring drama (Rudy, Rocky, The Rookie).  I can’t think of many sports movies about the team owner.

When I first heard about this movie and heard that Brad Pitt was involved as the lead, I was intrigued.
Say what you will about Brad Pitt’s personal life, but he is a very flexible actor.  He can play a nutjob mental patient, an imaginary fighting partner, or a stoned out drug addict.  Well, you can now add Major League Baseball team General Manager to list of characters he has convincingly played.

I love baseball, but admittedly, I dont remember the 2002 Oakland A’s.  For some reason, that part of my memory is empty when it comes to thrilling baseball seasons.  For those of you like me who don’t remember, Oakland made it to the playoffs in the 2001 season, however their 3 most talented and popular players were all up for free agency and were leaving the team at the end of the year.  This left the small market A’s without their three best players.  Team GM Billy Beane (played by Pitt) was responsible for putting together a competitive team for the 2002 season.  To make matters worse, he had to do it with an even smaller budget than the year before.

Beane was disenchanted with the scouting system and wanted a change.  Early in the off season, he met a young economics analyst named Peter Brand (played by Jonah Hill) who had never worked for a major league baseball team before.  Peter Brand loves numbers, especially baseball statistics.  Using a theory called sabermetrics, which was taken from a book by author and baseball historian Bill James, says that baseball players can be effectively rated on their performance based solely on certain statistics.  Brand believes that players should play based almost entirely on their on base percentage.  Standard baseball statistics like homeruns, fielding errors, or stolen bases mean very little.  Beane sees something in Brand and hires him to be his assistant in Oakland.

Beane and Brand go against all logic and start putting together a team based entirely on these ideas.  They sign a washed up David Justice who is beyond his prime and even sign players to play out of position for the simple fact that they can get on base.  Beane dismisses his long time scouting coaches and becomes at odds with team manager Art Howe (played by Philip Seymour Hoffman) because his ways go against established baseball practices.

At the start of the 2002 season, Beane and Brand’s plan doesn’t seem to be working.  The team doesn’t understand their plan, the fans don’t understand it, and neither does the manager.  Eventually, it starts to work. Oakland slowly starts to move up in the standings.  Later in the season, Oakland goes on an unprecedented 20-game winning streak, which is an American League record.  It seems that sabermetrics is for real…or is it.

I’ve given enough of the story away to entice you to see this movie.  As I said earlier, this isn’t a typical sports movie.  Sure, there’s an underdog persevering against the odds, but you wont be jumping out of your seat chanting “Rudy, Rudy, Rudy” at the end, and its certainly not a comedy.  The movie is a bit slow paced, but I never got bored watching it.  I enjoyed the performances by all the actors.  This was Jonah Hill’s last role before he lost a ton of weight, but it was good to see him play a serious role, which goes against his typecast for wacky comedic characters.

This movie won’t ever go down as a sports-movie classic.  It will never be mentioned in the league of movies like Bull Durham, Raging Bull, or the Natural, but it does have its place.  Its an interesting concept based on a true story.  If you like baseball, you should really enjoy this movie.  The emphasis on statistics and slow pace may not make it ideal for non baseball fans, but I think the good acting, and unique story should make it watchable for anyone.