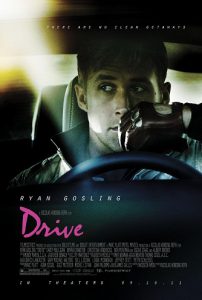 I’ll start by saying that Drive is the best movie I’ve seen in a while.  With that in mind, I’ve found that while Im not alone – there’s many critics saying this is one of the best films of 2011, I have seen many people have wildly varying opinions about it.

One thing that ultimately impacts people’s final opinion of a movie, is what they thought about it before they started the movie, and that is one thing that can make or break a movie such as this.

Drive is not so much a movie about driving, its more of a human interest story.  The movie poster has a caption that says “Some Heroes are Real” and without revealing too much about the plot of the movie, that should give you a small idea that you will get a little more than you paid for with this movie.

Drive tells the story of “the Driver” whose name is never revealed throughout the movie.  The Driver is played brilliantly by Ryan Gosling.  The Driver is a stunt driver out in Hollywood, who occasionally uses his driving abilities to be a getaway-driver-for-hire.  The movie begins showing him driving away two bank robbers during a heist.  The Driver never panics and rarely speaks.  He succeeds at escaping this initial heist, and afterwards he returns to his apartment in an obviously poor part of town.

His neighbor is Irene (played by Carey Mulligan) and her young son, Benicio.  Despite the Driver’s attempts at keeping his distance from other people, he eventually offers his help in driving Irene home after her car breaks down at a local grocery store.  When the Driver is not driving for Hollywood movies, or assisting bank robbers, he works at a car repair garage for Shannon (played by Bryan Cranston).  Upon learning that the Driver works at a garage, Irene chooses to take her car there for repairs.

At this point, the relationship between the Driver, Irene, and her son begin.  You learn that Benicio’s father, Standard, is in prison but is soon to be released.  This movie could have turned into an adulterous sex filled romance between the Driver and Irene, but it never happens.  The Driver takes a liking to Irene and Benicio, and upon Standard’s release from prison, the Driver maintains his distance.

But it all is not well in Irene’s life.  Her feelings for the Driver are complicated even further when we learn that Standard owes protection money to some goons from when he was in prison.  That night, he is jumped and a threat is delivered to him and Benicio that he must pay, “or else”.

This does not sit well with the Driver, so he intervenes and agrees to help Standard do “one more job” to get the money he needs to get the goons off his back.

I’ll stop right here, and let you see the movie for yourselves.  Needless to say, there are some great performances in this movie.  Most notably by Albert Brooks who plays a sort of sympathetic mob boss who is reluctant to do dirty feeds.  Ron Perlman is a Jewish, wanna be gangster who owns a local restaurant and fronts his evil empire from behind the counter.

One other star of this movie is its soundtrack.  Although the movie is set in present day (by its use of modern cars and cell phones), it has a very 80s retro feel to it.  Almost all of the music has an 80s synth-pop vibe to it, but none of the songs are recognizable.  Its almost as if this movie is in some temporal time displacement where it wants to be in the 80s, but its a modern movie at the same time.  Whatever the case, I loved the soundtrack and downloaded it shortly after seeing the film.

Although there are some cool car chase scenes, the movie is great for what it doesn’t have.  This is not an action movie.  It is not a sex-filled romance, or even a gangster movie.  Its a movie about a quiet man, with questionable morals, who is put into a situation where he needs to be a “real hero”.  What I loved the most about Drive, is that every time you think something is going to happen, it doesn’t.  It doesn’t fit into a single genre of film.  It has some slow parts, which I think put people off who are expecting a high octane car chase film.

Overall, I give this movie a thumbs up because it tells a great story, its unique, its unpredictable, and overall, its just a great movie!  Definitely one of the better movies of 2011!